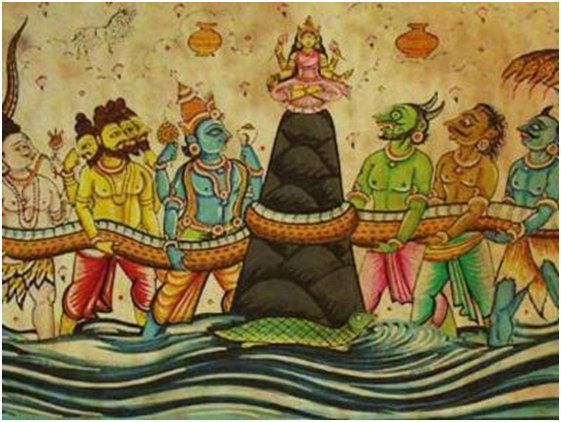 Maha Shivratri is a Hindu festival venerating Lord Shiva, celebrated by the Hindus all over the world. Maha Shivratri means ‘the great night of Lord Shiva’. It is a festival celebrated at night, unlike other festivals. The night of Maha Shivratri is live with temples decorated with lights and flowers, thousands of devotees thronging the temples, temple bells ringing through the night, the air filled with smell of incense and chanting of “Om Namah Shivaya” and celebrating the transcendental energies of Shiva. It is a night to travel from darkness to light. A night of tremendous divine energies.

Another personality aspect of Lord Shiva is His being nirguna , unmanifested, unchangeable and formless . He is infinite. Shiva means the one who is auspicious, the soul of everything. He is hailed by many names like Mahadev, Shambhu, Bholenath, Rudra etc.

Shivratri falls every lunar month on the 14th.day, according to the Hindu calendar. Maha Shivratri falls in Phalgun (February-March). This is the night when devotees stay awake through the night in prayers and devotion.

There are many legends of Maha Shivratri. One talks about the divine marriage between Shiva and Paravati. To glorify this divine union of Shiva and Shakti this auspicious day is celebrated.

The second is about how Lord Shiva came to the rescue of this earth and all creations on this night when the poison Halahala emerged during the churning of Milk Ocean (Samudra Manthan).

The poison could have devastated and ruined the cosmos if Shiva had not intervened and consumed it.  He consumed the deadly poison holding it in His throat which turned blue, giving Him the title of Neelkantha (the Blue throated one).

Ancient scriptures talk about one more astounding feature of Lord Shiva’s mysterious personality. It is said that on this day Lord Shiva displayed His anger though the performance of Tandava, the cosmic dance of destruction.

Another legend from Shiva Purana describes a pastime wherein Lord Vishnu and Lord Brahma fight over their lordship. Their fight ceases upon seeing the emergence of a Divine Light (Linga) caused by Lord Shiva. Wondering at the sight, Lord Shiva urges them to find out the origin and the end of that light. However failing to do so, Lord Brahma and Lord Vishnu realize Shiva’s omnipotence. The appearance of that Linga on this day is celebrated as Mahashivratri.

It is said that Lord Shiva is also known as Bholenath and Ashutosh meaning one who is quick to fulfil your desires. But, it is not easy to please Shiva for one has to undergo austerity to please Him. Once pleased, He can award anything desired. Mahashivratri is the night when Lord Shiva is quickly pleased. One must take advantage of this festival and try with all means to please Him.

The position of the constellations on the night of Maha Shivratri is considered very auspicious for meditation, there is an upsurge in energy vibrations. So, it is advisable for people to keep awake and meditate on Maha Shivratri. Lord Shiva bestows spiritual ascension and guides the way to it. Sadhaks and seekers of spirituality look forward to this night for spiritual growth. They stay awake through the day and night of auspicious energies and immerse in deep meditation, with the goal of spiritual attainment.

The Vedic rituals on Maha Shivratri in include fasting, taking holy bath, and worship of Shivalingam or Shivling by performing Abhishekham (sacred bathing) with milk, yoghurt, honey, ghee, sugar and water.

For pleasing the aull-auspicious Shiva, one can engage in the chanting of Sri Rudram, Chamakam and Dasa Shanti mantras during Abhishekham.

Devotees apply the Vermilion paste on the Lingam; offer the Bel Patra and fruits like Jujube, Wood Apple, flower garland, sweets and other fruit. They also burn incense sticks, light up ghee Diya and other rituals.

After the puja, the devotees do jagaran (night vigil) or stay awake the whole night singing devotional songs (bhajans) and meditating on His personal form.

The most popular and celebrated mantra of Lord Shiva is Om Namah Shivay. One can also chant the Mahamritunjaya mantra, Om Namo Bhagwate Rudraay or the Sri Rudram (Namakam and Chamakam)

Fasting for Mahashivratri – Part of Maha Shivrati rituals is fasting or Shivratri Vrat, through the whole day and night of this holy festival, so, while most religious fasts end with worshipping the deity, the Maha Shivratri fast continues even after the Abhishekham of the Shivling. One can break the fast (parana) the next morning between sunrise and before the end of Chaturdashi tithi. Fasting is abstaining from food which signifies control on self and senses. The importance of Maha Shivratri fast is to control the two great natural forces, Rajas guna (the quality of passionate activity) and Tamas guna (the quality of inertia, laziness, greed). Another most important aspect of the Maha Shivrati fast is that the day and night long fasting pleases Lord Shiva and wishes of the devotees are fulfilled by the Lord’s grace.

Fasting detoxifies the body and purifies the mind. The body feels lighter and the mind calms down and at the same time, the mind becomes alert which helps to be more focused in practicing meditation on this high vibration night of Maha Shivratri.

While many devotees choose to observe the Shivratri fast without water or food, it is recommended to fast with fruits and water during the day time but refraining from consuming any food after Sunset till the next morning.

Some devotees whose bodies are not suitable for fasting can eat small quantities of easily digestible food to keep the body light. Shivaratri fasting rules specify that the food should not comprise pulses, rice, wheat, and table salt. Instead of table salt, rock salt should be used.  In whichever fasting method is followed, post Sunset consuming food is not allowed.

Here is a list of some fasting food on Shivaratri:-

Breaking of the fast is done with first having the Prasad which was offered to Lord Shiva.

Shivratri kitni tarikh ki hai?  You can fast on 21st. February (Friday) and break in on 22nd February morning.

Getting Into the Club: Your Options in Toronto

How to camp long term in the USA

The Benefits of School Sports Tours

How Mistranslation Affects Your Business, Medical, and Legal Concerns

DO EYEBROWS GROW BACK?

4 Things you must know about personal loans