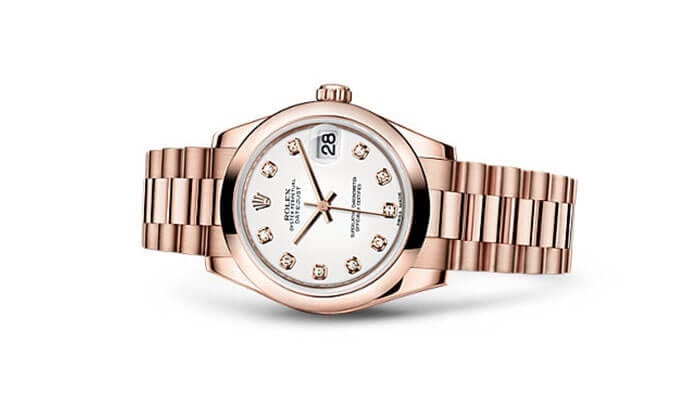 Student filling out answers to a test with a pencil.
Shopping

The wristwatch has undoubtedly become a statement item for the modern man, but, believe it or not, it was women who first made the statement. Dating all the way back to the 16th century, wristwatches were seen as a feminine pursuit. While men proudly sported pocket watches, it was women who were the first to wear watches on their wrists, primarily in the form of jewellery. Although certainly admirable for their elegant and artistic exterior, their function was not of much consequence.

Nowadays, we are seeing that the options for women are growing rapidly. Manufacturers are recognising the demand for function but with a slightly more feminine aesthetic. Therefore, more and more brands are introducing such models with increased complications featuring lighter colours, more variation in materials or a smaller size to the male counterpart.

Without any further delays here is our 5 Best Ladies watches:

Looking your best has never been easier than with Emporio Armani Ladies Watches. Clean lines, classic tones and design details worth drooling over give these timepieces luxurious style that lasts season after season. Select a gold-tone, silver-tone or rose gold-tone watch to wear to the office.

The elegant charm of an Armani women’s watch lends itself perfectly to professional days – allowing you to express your personal style within the office dress code. The beauty of these watches allows them to go straight from the office to a night out with friends without missing a beat. From a night at the theater to a late dinner, an Armani womens watch looks effortlessly chic with a number of outfits.

Dress it up with a suit or business casual attire, or dress it down with jeans for an instantly timeless look that won’t be forgotten.

In the provincial, picturesque town of Le Brassus, Switzerland, watchmakers Jules Louis Audemars and Edward Auguste Piguet started creating movements for other labels. Many years later, since the brand’s conception in 1875, it started to stamp its own name on timepieces, expanding both its reach and designs. It certainly took great pains to develop its aesthetic and deftness in the craft, promoting the slogan, “To break the rules, you must first master them.”

Audemars Piguet achieved acclaim in the 1970s when the Royal Oak collection—with its distinct octagonal bezel—was introduced. But it was only two decades later that it placed a heavier focus on its offerings for women. It unveiled the Millenary watch in 1995 initially for men, then steered the collection—which is distinguished for its off-centered dial and elliptical case—for women exclusively in 2015.

In 1917, brothers Werner, Ernst, and Fritz Werner built Schlup & Co., a factory in Lengnau, Switzerland, that would later evolve into Rado in the 1950s to celebrate the company’s 40th anniversary. It was a decade later after the introduction of the DiaStar 1 that the brand became renowned for introducing sapphire crystals and hard metal to watchmaking.

It continued to innovate throughout the years, creating high-tech bracelets in scratch-resistant and plasma ceramics, These characteristics are exemplified in the True Thinline, a collection that is as sleek as it is technologically advanced.

Throughout the subsequent decades, the newly minted Patek Philippe revolutionized the watchmaking industry, garnering patent after patent, from the perpetual calendar mechanism and double chronograph to self-winding mechanism and time-zone watches.

Now, when the company announces a new collection or additions to an existing one, watch collectors (both men and women) wait with bated breath, showing the brand’s eminence in the industry. Though anything from the company is worth the investment, what really epitomizes the Swiss watch purveyor is the Perpetual Calendar.

Few labels can rival the reputation Hermès has in the world of luxury leather. After all, it started as a manufacturer of accessories for carriages in 1837. It has since become a full-fledged lifestyle brand, introducing timepieces to its stable in 1978. Under the moniker La Montre Hermès SA, the subsidiary operates in Biel, Switzerland, where it creates collections that fall in line with the parent company’s heritage.

And no watch encapsulates this principle more than the Cape Cod. First introduced in 1991, the timepiece was the brainchild of fashion designer Martin Margiela, who was the artistic director of the brand’s ready-to-wear line at the time. Seven years later, it introduced a distinct double strap made of leather, further highlighting  Hermès’s equestrian roots.

Watches have become more than just an accessory. They hold meaning, often offer a story, and allow the wearer a connection with the past. Women have the luxury of choosing a dress watch for the evening, a Rolex GMT to travel, or a vintage Omega Speedmaster on the weekend. There really is something out there to suit everyone’s tastes and desires, and that is something that is undoubtedly set to continue.

SEO & the Power of Infographics

Ladies Best Watches To Own

What type of dresses ought I be buying for the summer season?

Get the high-quality personalized gift you want

The Myths and Misconceptions Surrounding Shapewear