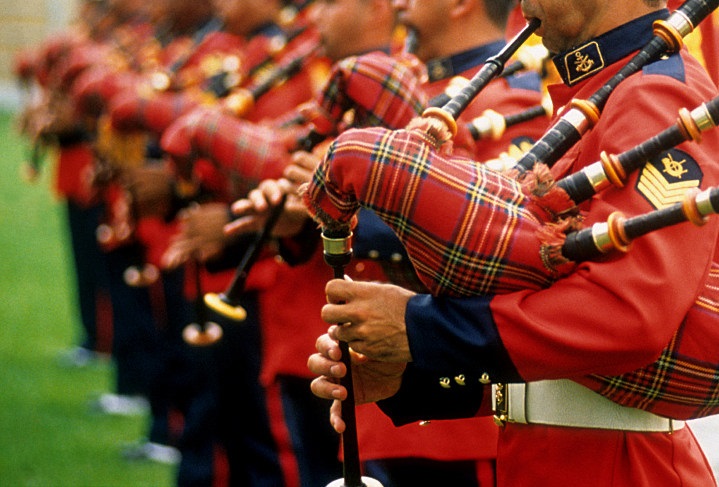 The bagpipe uses this hole, clogging it more or less with a candle, in order to obtain the right tonal height of the flute that the first, from below, hole of the flute gives. The first, finally from above, hole – the smallest usually compared to all the others – is wedged in its opening, inside the tube of the lumen, a small tube, usually made of hen feather.

To play the bagpipe practice chanters, the same applies to the case of the tsambouna in terms of the position of the bag, the breath, the decoration of the melody. Thus, the bagpipe is played with the asci usually held under the left armpit. The player of the instrument breathes with the diaphragm, and not with the chest, so it can blow for many hours without getting tired. The pressure of the air on the tongues is done by blowing from the mouthpiece and by tightening the bag with the left arm. When the bagpipe temporarily stops blowing, the hook presses harder to reduce the air pressure. The long lumen is usually held under the armpit or left to rest on the shoulder, or in the arm, or, rarely, left hanging. It does not have, as we have said, holes and gives a single phthong, which always “matches” the phthong used as a tonic in the melody’s flute. So in playing it constantly accompanies the melody with the tone of the tonic, an octave usually lower. In other words, it keeps an equal, from the oldest as we know polyphonic forms.

The Making of the Bagpipe

The 7 + 1 holes in the bag give the intervals of the natural diatonic scale. The tonality of the scale is usually the fourth hole, from below, with a subdued (the previous hole) over a ton of tone from the tonic. The pitch of the tonal depends, mainly, as on the tsambouna, on the size of the short tube and its tongue. The bagpipe is played on its own. However, it is also played with other instruments: bagpipe and toumbeleki or bagpipe and drums (tambourine). Also it was gaida and daouli and in the area of ​​Evrosgaida and lyre and, before the war, gaida and masa.

The tsambouna and the bagpipe in Greece:

Like so many other musical instruments, the ascetic comes to Greece from Asia, around the 1st to the 2nd AD. century, according to reliable clear testimonies of Suetonius, Dionysus of Chrysostom, etc. Since then, its presence in Greece and the Hellenism of the Near East has been documented by many iconographic and philological sources, of which we mention the most important for the ascavlos, tsambounas type, miniature Greek manuscript of the 11th century, as well as the testimony of the Persian philosopher Avicenna (IbnSina), in the same century.

The same type of ascetic is found in frescoes: of AgiosNikolaos, near Kakopetria, Cyprus (14th century), of the monastery of AgiosFanourios, in Valsamonero, Heraklion, Crete (15th century) and of the monastery of Karakalos, on Mount Athos (18th century). Also the other type of ascetic, the bagpipe in frescoes of the monasteries of the Great Lavra of Mount Athos and Barlaam of Meteora (16th century). In the same century (16th century) Nickolas de Nicolay illustrates his chronicle with a “Greek villager” who plays the bagpipe. All three of these bagpipe performances, in addition to the importance of the testimony itself for the instrument, are of additional interest that their flutes are conical. The best ukulele brands will be there too.

This type of bagpipe, which is played today as we know it in many parts of Europe: Southern Italy, Sicily, France, Spain, Scotland, etc., is not found in Greece. However, the illustrations mentioned above, along with the information that they used to use the double percussion language in the Greek bagpipe – such a language is still used in European bagpipes in conical tubes allow us to assume that they may have made cone bagpipes in Greece in the past tubes.

Secrets of Getting a Good Job

Online Printing: Give a Form to Your Imagination

Corporate Team Building Activities Which Every Team Would Love!

6 Wrong Things Parents Do With Their Newborns