Home > Shopping > Aerodesign – what is it? 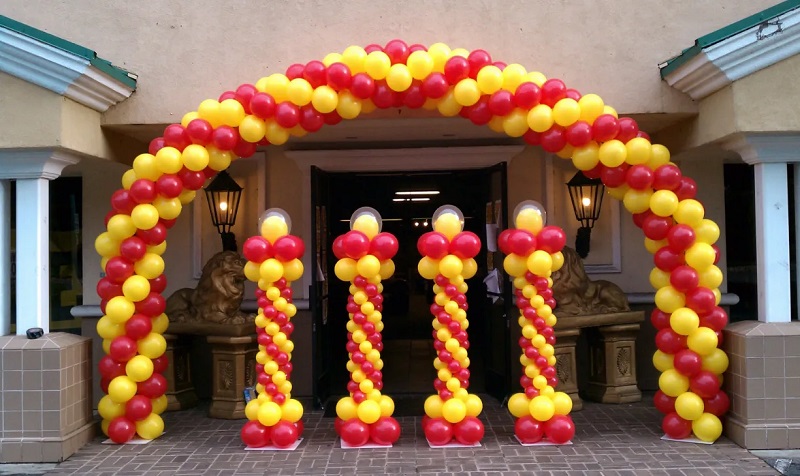 The party starts with balloons. Multicolored latex and foil “bubbles” are well-known elements of space decoration for the holiday. Over four thousand years ago people learned to use the available materials to create these holiday synonyms.

People involved in decorating a festive interior and exterior with custom balloons are called aerodesigners. “Aero” means “air”, and it turns out that an aerodesigner is a person who practically makes a holiday and joy out of thin air.

Why Is The UV Radiation So Dangerous For Balloons?

Direct sunlight also has a detrimental effect on latex balloons with its ultraviolet spectrum. The fact is that the ultraviolet spectrum activates oxygen in the atmosphere, and it begins to interact more intensively with latex (by oxidizing it). The greatest ultraviolet radiation occurs when the sun is at its zenith. As a result, balloons will fall in a matter of hours. The smallest ultraviolet radiation occurs when the sun is near the horizon. This is the time when direct sunlight is not so destructive for the balloons.

Does the temperature influence the balloons?

100% yes! Here are some tips for you to save the decorations from high or low temperatures:

Why Do Balloons Burst?

The first reason – too dusty room. The balloons can be easily electrified due to the fact that they are synthetic, so they attract the dust to the surface including sharp particles. This can cause a premature explosion.

The second reason is that the balloons are exposed to direct sunlight. The sun’s rays pierce the walls of the balloon. As a result, the pores of the latex expand and the ball bursts. For this reason, it is not recommended to keep the balloons on the street or choose a place in the shade.

The third reason is electrification. It is this invisible cause that very often serves as a catalyst for a balloon to explode. We often cannot explain it, because there are no visible reasons. The situation can be corrected by ordinary water, for this purpose it is possible to spray it on balloons.

The fourth reason is the change in temperature in the direction of its increase. This can happen if the balloons were inflated with helium in a room with the same temperature and then delivered to a room with a higher temperature. At the same time we must not forget that any gas has a tendency to expand.

How To Inflate And Tie Balloons Correctly?

You have probably seen more than once when during the decorating of a holiday with balloons, a significant part of them burst while inflating, while others exploded after they were hung on the ceiling or wall. Why is this happening?

Each balloon has its own size. It is a bad idea to to inflate it more than the admissible norm – as a result it becomes more vulnerable at contact with sharp objects. If it doesn’t explode right away, it will definitely do so after a while. Therefore, before inflating a balloon, you need to know its final size. You can find out if you inflated the balloon correctly by the shape of the tail: if the tail is swollen and a “pear” has formed near the string, then you have overdone it and next time you will need to inflate it less.

Which Watches Hold Their Value Best

Things you need to know about Mil-Spec Paracord

All you need to know about 750 Paracord and other Paracords

What to do about your girlfriend’s birthday, these ideas are alarming